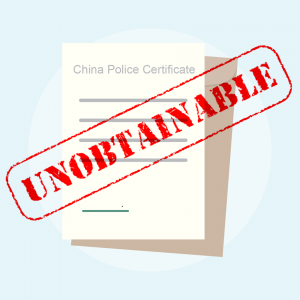 What I can do with my immigration application if my China police certificate is unobtainable?

Document your unsuccessful efforts in obtaining a China police certificate

If you were not able to get a China police certificate, make sure that you document your efforts. Below is some possible documentation that you can gather.

Always ask the local issuing authority to provide a statement explaining their refusal. Such a statement is great evidence of your attempts.

However, most local authorities are unwilling to provide anything in writing upon refusals. There’s no rule in China enforcing them to do so, if your application is not accepted.

The second documentary evidence I find most convincing is written rules issued by local authorities. China does not have a central authority that issues police certificates. Instead, local authorities in each city follow their own rules. Some cities don’t have rules at all, while others may have rules unavailable to the public.

If an issuing authority refuses to accept your application, try to ask for a blank paper application form. An application can be evidence of your attempts made to apply for a China police certificate.

Some authorities do not have written application forms. Instead, they take applications orally. This is especially true in smaller cities where fewer foreigners have lived in the city. Paper forms are also not available at some notary offices where paper forms have been replaced by electronic forms.

While having no control over whether there’s any written evidence available, you have all the rights in preparing a detailed statement explaining what you have done. Take notes of when you made the application, which officers you spoke to, and what the conversations were. Then, put together the important facts with any available supporting documents into a statement for submission to immigration authorities.

We are experts in obtaining China police certificates or preparing statements explaining why a certificate is unobtainable. If you are interested in hiring us, the best way to get started is to fill in a quote request form. Click the below button to be directed to the form.

Find out more or adjust your settings.

This website uses cookies so that we can provide you with the best user experience possible. Cookie information is stored in your browser and performs functions such as recognising you when you return to our website and helping our team to understand which sections of the website you find most interesting and useful.

Strictly Necessary Cookie should be enabled at all times so that we can save your preferences for cookie settings.

If you disable this cookie, we will not be able to save your preferences. This means that every time you visit this website you will need to enable or disable cookies again.